COVID-19 UPDATE: WORKING FOR YOU IN THESE CHALLENGING TIMES
Aggressive Defense of All Criminal Matters
Contact Us Now
For a Free Consultation 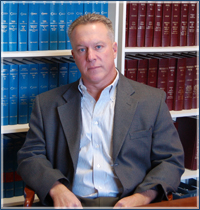 In the mid 1980’s Mr. Neyman began practicing law in San Francisco, California with the firm of Wilhelm, Thompson, Wentholt and Gibbs serving as an associate attorney in the criminal and civil litigation departments. He later served as a Deputy District Attorney in the Los Angeles County District Attorney’s Office prosecuting various South Central and Southeast Los Angeles gang members. After successfully handling and prosecuting hundreds of gang cases ranging from drug offenses to murders Mr. Neyman moved to Massachusetts where in 1990 he opened his own law practice.

Mr. Neyman’s office initially concentrated exclusively on criminal defense work. The clientele grew to include among others, students, career criminals, professionals and CEOs of large corporations. The cases ranged from traffic violations to major felonies. As the practice expanded, Mr. Neyman began to handle some of these clients’ high end civil cases on a selective basis. A sampling of some of the cases handled by our offices are detailed in the PRACTICE AREAS pages of this website.

If you have been charged with a drug crime in Boston or within the state of Massachusetts, please visit our drug offense website, call 617-263-6800, or contact us online.

50 Congress St #525 Boston, MA 02109
Client Reviews
★★★★★
"We went to trial and won. He saved me fifteen years mandatory in state prison for this case." A.C. Boston, Massachusetts
★★★★★
"I hired him and he got the case dismissed before I had to go into a courtroom. My school never found out and if they had I would have lost my academic scholarships. He really saved my college career." Melissa C. Cold Spring, New York, October 2013
★★★★★
"My union rep told me to call Steve Neyman. From the get go I felt comfortable with him. He took the time to talk to me about my case whenever I needed .... He even gave me his personal cell number and took all my calls. We won the case and I kept my job." Bart L. S.
★★★★★
"The best criminal defense lawyer in Massachusetts. Takes all of his client's calls at any time of the day or night. He was always there for me and my family. Steve saved my life." Jacquille D. Brockton, Massachusetts
★★★★★
"In less than two months Stephen Neyman got my old conviction vacated. I now have no criminal record." Paul W. Boston, Massachusetts
View More
Submit a Law Firm Client Review